Bergen (sometimes called by the Norse Bjørgvin), located on Norway’s scenic west coast, is the 2nd largest city in Norway, with a population of about 275,000 as of 2014. Bergen has a rich and unique history, very different than other Norwegian cities. A member of the Hanseatic League, Bergen was home to German merchants in the wharf area immediately surrounding the port. The Germans created their own segregated encampment there consisting of homes and businesses. The wharf area is known as Bryggen, the remains of which still exist today. Bryggen is designated as a UNESCO World Heritage Site since 1979. Due to fires throughout Bergen’s history only one-fourth of Bryggen consists of the original wood buildings dating back approximately 300 years; the remainder is rebuilt according to historical records. Near to Bryggen is Bergen’s world-famous Fish Market (Fisketorget), where tourists and locals alike purchase freshly caught fish, handicrafts, flowers, fruits and vegetables, and more. The street lining the port is home to excellent, albeit expensive, fish restaurants. For the more exotic-minded consider purchasing a minke whale steak, which tastes remarkably like beef but with a salty sea accent and a texture not unlike tuna. (Whaling is a contentious issue both inside Norway and internationally; I will write more about it in a separate article). One of Bergen’s most well-known attractions is the Fløibanen Funicular, open since 1918. The funicular is a narrow gauge railway that travels a length of 2,789 feet and a height of 984 feet. The route takes about seven minutes, including stops at each station along the way. The funicular departs every 15 minutes from 10:00 am to 7:00 pm. For early morning and late evening departures, the funicular runs every half hour instead. The route’s final stop is at the peak of Fløyen, one of seven mountains (De syv fjell) that surround the city. 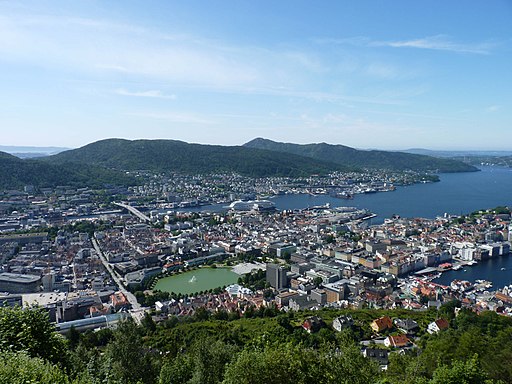 Bergen from the Fløibanen. Photo by Gerben Jacob under Creative Commons license

On top of Fløyen one can enjoy spectacular views of the city below and the surrounding fjords and islands. In August of 2007 a special granite viewing platform, Fløytrappene, was constructed, covering 500 square meters in a series of steps and ledges. Many people visit the kiosk and souvenir shop where it’s popular to purchase a coffee, hot dog, ice cream, chocolate bar or soft drink. There is also a full-service restaurant available, Fløien Folkerestaurant, open daily from mid-May to the end of August. Yet Fløyen is best appreciated by leisurely wasting away an afternoon taking in the beautiful nature. There are many different walking trails available, along with picnic spots, a playground for children, access to Skomakerdiket lake, and more.

Art lovers will be pleased to know that Bergen is home to a number of art museums and galleries, most located along Lille Lungegårdsvann, the small 5-acre lake found in the city center. The most important museum is referred to as KODE, and actually consists of four galleries that fall under one management and admission price. KODE 1 is the West Norway Museum of Decorative Art, closed for renovation for two years from Jan. 1, 2015. KODE 2 is Stenersens Collection, which focuses on contemporary art.

KODE 3 is the Rasmus Meyers Collection, housing works from the Golden Age of Scandinavian art, including J. C. Dahl, Harriet Backer, Erik Werenskiold and Gerhard Munthe. The Rasmus Meyers Collection is also home to the Munch Museum in Bergen, the 2nd largest collection of Edward Munch paintings outside of Oslo. The collection holds more than 100 paper works and 50 painting. Most notable in the collection are the “Frieze of Life” series and a unique pen and ink version of Munch’ Scream. KODE 4 is the Lysverket Art collection and includes both Norwegian and international art with pieces by Paul Klee, Pablo Picasso, Joan Miró, Wassily Kandinky, along with Norwegians Edward Munch and Jacob Weidemann.

Also worth seeing downtown is the statue of Ole Bull, the famous violinist and composer from Bergen. Other tourist attractions worth seeing include the Bergen Aquarium and the Old Bergen Museum, consisting of 55 wooden homes from the 18th, 19th and 20th centuries. There are so many other interesting and unique attractions that Bergen has to offer, you really need to visit to see for yourself. There are also other attractions outside of the city center, which will be the subject for a future article. The photos in this article were taken by Doug Tomren in April of 2013 (unless otherwise noted), in conjunction with a trip on the famous Hurtigruten Norwegian Coastal Voyage on the MS Midnatsol.

2 thoughts on “Exploring the city center of Bergen, Norway”