Seattle’s most recent sister city is Sihanoukville, Cambodia. The relationship has been active since 1999 when Sihanoukville became Seattle’s 21st sister city. The Seattle-Sihanoukville Sister City Association provides a central source of communication between the two sister cities. Projects in the past have included: raising funds to build a primary school in a village in Sihanoukville province; funding a high school library; coordinating a school pen pal exchange program, and more. One of the bigger events in Seattle is the popular Cambodian New Year celebration in April, as well as a summer picnic and holiday gatherings. For more information about the relationship between these two cities see the Seattle-Sihanoukville Sister City Association official website and Facebook page.

Sihanoukville is Cambodia’s fourth largest city and plays an important economic role as a major seaport and coastal tourist resort. The Port of Sihanoukville is the largest in Cambodia and handles nearly all of the country’s water-based trade. The Port provides cargo and container berths as well as an oil terminal. In 2002 seagoing cargo trade between Cambodia and Port of Seattle was valued at $107.8 million. Today, Cambodia is now the Port of Seattle’s 18th largest trading partner. 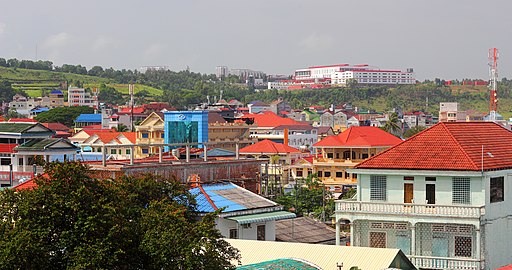 On the tourism side, Sihanoukville offers many fun activities, including scuba diving, snorkeling and excursions to surrounding offshore islands. Nearby fishing villages provde a glimpse into the local culture. The city’s public market offers exotic fruits, vegetables and an abundance of seafood. In the future, Sihanoukville may become a port of call for cruise ships. Additionally, a golf course is under construction adjacent to a new beachfront resort complex.

In 1956 President Dwight Eisenhower started Sister Cities International as part of a White House conference on citizen diplomacy. The broad idea behind developing sister city relationships is to create a person-to-person exchange between Americans and citizens of other countries based on educational, cultural, information and trade exchanges. Americans can and should learn about and celebrate differences that we have with communities around the world, thus creating new friendships and hopefully playing a small role in making future world conflict less likely.


#ErikTomrenWrites is a participant in the Amazon Services LLC Associates Program, an affiliate advertising program designed to provide a means for sites to earn advertising fees by advertising and linking to amazon.com.